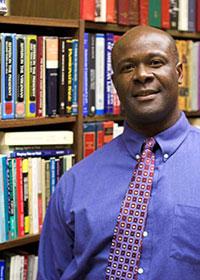 Stephen Middleton received his B.A. degree from Morris College, the M.A. degree from The Ohio State University, and the Ph.D. degree from Miami University (Ohio). He completed the first-year curriculum in law at New York University School of Law. His research interest is race and the legal system. His new book is entitled, The Black Laws: Race and the Legal Process in Ohio, 1787-1860 (2005) and he is currently working on Robert Heberton Terrell, an African American judge in Washington, D.C. He frequently gives talks to schools and community groups. He has presented talks at Broadneck High School in Annapolis, Maryland and Chapel Hill High School in North Carolina; the Environmental Protection Office (EPA) in RTP North Carolina; the Government Accounting Office (GAO) in Cincinnati OH; civic clubs such as the Lions and Rotary, and national organizations including the National Underground Railroad Freedom Center, African American Heritage Preservation Foundation, National Council of Negro Women (Raleigh Section), Cross High School Alumni Class of 1972, and numerous other associations. He has also conducted teacher-training workshops for the National Humanities Center and the Bill of Rights Institute.

Judge Robert Herberton Terrell: The Fight to Win the Prize (Born into slavery in Virginia in 1857, Robert Terrell went on to be a valedictorian graduate of Harvard University and earned law degrees from Howard University Law School. He was an educator at the black M Street High School in the District of Columbia and municipal judge in the capital).