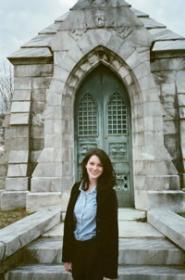 I am a fourth year PhD student focusing on early modern European history of gender, medicine, and the occult. My current project examines the seemingly intertwined relationships of witchcraft, demonic possession, and melancholia in Western Europe. I am interested in how medical, judicial, and lay experts examined feminine bodies exhibiting abnormal behavior. My goal is to uncover how women presenting similar symptoms were “diagnosed” with medical abnormalities on some occasions, and supernatural afflictions in other instances. I believe by reexamining the current medical and supernatural historiography of the early modern period, historians may gain greater insight into body politics, gender, and conceptions of expertise.

● History of Science and Medicine

● Folklore and the Occult

● "Poison For All: Arsenic Crisis in 1830s Britain," presented at the Southern Conference on British Studies; Dallas, Texas (November 2017)

● American Association for the Advancement of Science