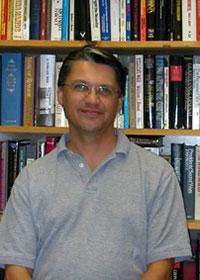 Richard V. Damms is currently an Associate Professor of American history and a member of the department's Empire, Power, Identity and Conflict (EPIC) faculty. He is the author of two books: The Eisenhower Presidency, 1953-1961 (New York: Longman, 2002); and Scientists and Statesmen: Eisenhower’s Science Advisers and National Security Policy (Dordrecht: Republic of Letters, 2015).  He co-edited, with Mary Kathryn Barbier, Culture, Power, and Security: New Directions in the History of National and International Security (Newcastle: Cambridge Scholars Publishing, 2012). He has published articles and essays on science, technology and national security in the Cold War and the Eisenhower era more generally.  His essay, “In Search of some big, imaginative plan: the Eisenhower Administration and American Strategy in the Middle East after Suez,” in Simon C. Smith, ed., Reassessing Suez 1956 (Ashgate, 2008) provides a preview of his current book-length project on Anglo-American relations in the aftermath of the 1956 Suez/Sinai Crisis. He has presented papers at international conferences in Taiwan, the United Kingdom, Ireland and the Netherlands. Damms is actively involved in efforts to enhance the quality of history instruction in the public schools. He is former editor-in-chief of Mississippi History Now: the Online Journal of the Mississippi Historical Society, directed the Center for Historical Studies in 2003-6, established under the History Department's million-dollar Teaching American History Grant funded by the U.S. Department of Education, and serves on committees for the Mississippi Department of Education and the Mississippi Institutions of Higher Learning. Damms is a past recipient of the Mississippi Humanities Council’s Humanities Teacher of the Year Award. He has supervised five doctoral dissertations and welcomes the opportunity to supervise graduate theses and dissertations in diplomatic history, political history, and national security affairs broadly defined.