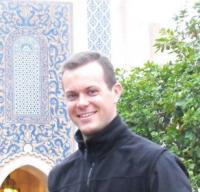 I am in my 4th year at Mississippi State University, currently finishing the coursework for the PhD in US history after having completed dual masters degrees in history and French. After focusing on modern European history for the MA, I am now focusing on the history of US foreign relations during the Cold War. My research interests center around the intellectual history of the Cold War, and specifically on thinkers and actors who attempted to break out of the excessively dualist atmosphere of Cold War mindsets.

One of my previous projects focused on the 1968 Prague Spring as a key contributor to the mindsets of socialists and “fellow travelers” around the world. My interest in the 1968 Prague Spring was first sparked when I was a student in Paris, staying in the apartments of Dr. Regina Tinelli (RIP 2007), a retired research microbiologist at the Pasteur Institute. This accomplished scientist had traveled the world for her work, including a visit to Prague during the famous events of 1968. Hearing these events told from a first person perspective fascinated me. Later, when I was working in New Zealand, I discovered that a native New Zealander named Ian Milner had been living in Prague during the same era. I was able to access his numerous letters in the Alexander Turnbull National Archive Library in Wellington. Seeing the Prague Spring through the eyes of this convinced socialist intrigued me and gave me a desire to pursue this topic.  My paper traces the changes in the mindset and motivations of someone who spied for the Soviet Union in the West and then ended up living behind the Iron Curtain.

My current project continues the theme of the Cold War, this time looking at the subculture of Cold War codebreakers in the West and the effect that this quiet but powerful group had on the foreign policy decisions that started the Cold War under the Truman administration. (Having been a Ham Radio operator for several years and working with various radio transmission encoding schemes has probably played into my interest in this topic.)

My historical side “hobby” includes some topics of medieval intellectual history. One of my past projects examined how attitudes towards various reforms of the Catholic liturgy have evolved over the last several centuries. I argue that certain theologians have, in some cases, attempted to project modern theology onto liturgical practices of centuries past, resulting in distorted assumptions about historical practices. My paper on “Western Medieval Offertories” translates and explores a few texts from the now-vanished medieval liturgical world and uses these texts as counter-examples to some over-hasty modern theological conclusions.

Peer-reviewed and passed for publication in Oct 2021 in the New Zealand Journal of History: “Socialism Tells Its Own Story: Ian Milner and the Dream of a Redeemed Socialism in the Prague Spring.”

“Three Perspectives on the 1570 Reform of the Roman Liturgy.” Latin Mass Magazine, winter/spring 2018.