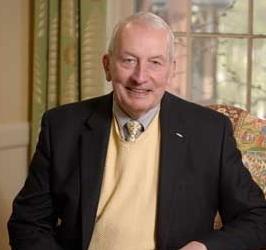 Frank J. Williams served as Chief Justice of the Rhode Island Supreme Court from February 2001 to December 2008.  He was appointed by Governor Lincoln Almond and unanimously confirmed by the state legislature, after serving for five years as Associate Justice of the Superior Court. He now serves as a mediator/arbitrator and volunteers on the Supreme Court’s appellate mediation panel – a program the Chief created with no cost to litigants.

Chief Justice Williams is also one of the nation’s leading authorities on the life and times of Abraham Lincoln, and one of the country’s most renowned Lincoln collectors, having amassed an unsurpassed private library and archive that ranks among the nation’s largest and finest. In June 2017, he and his wife, Virginia, donated The Frank & Virginia Collections of Lincolniana to Mississippi State University and, in 2021, created a Chair in Abraham Lincoln and Civil War Studies at MSU.  In addition, for more than twenty years he has been widely acknowledged as the foremost leader of America’s Lincoln fraternity – the large, nationwide community of Lincoln historians, students, and enthusiasts.

Chief Justice Williams has served from 1996 to 2018 as founding Chairman of The Lincoln Forum, a national assembly of Lincoln and Civil War devotees.  The Forum has blossomed into one of the largest Lincoln organizations in the nation, boasting more than 1,000 members.  The Forum’s annual symposium in Gettysburg attracts hundreds of attendees and many of the country’s leading historians and speakers.  The Forum chairman has also spurred publication of the organization’s first five volumes of papers.  And Chief Justice Williams has introduced an annual award of achievement that has quickly evolved into one of the most coveted in the field, and pioneered symposium scholarship and essay competition programs aimed at exposing young people to Civil War history.

Chief Justice Williams also served for nine years (1976-1985) as President of the Abraham Lincoln Association in Springfield, Illinois, helping to triple that organization’s membership, reviving its long-dormant publishing program, and working to initiate and fund the Lincoln Legal Papers Project, which has issued the complete record of Abraham Lincoln’s career as an attorney at law in an electronic DVD edition.

A scholar of national reputation, Williams is the author or editor of over twenty books including Judging Lincoln, a book of his essays published in 2002 by Southern Illinois University Press.  With Harold Holzer and Edna Greene Medford of Howard University, he is the co-author of The Emancipation Proclamation: Three Views, a book on the legal, political, and cultural impact of the Emancipation Proclamation, published by Louisiana State University Press in April 2006. His Lincoln Lessons: Reflections on America’s Greatest Leader, with William D. Pederson, was published by Southern Illinois University Press in 2009 which also published his most recent book, Lincoln as Hero.

Also, with Harold Holzer, he published in 1998 a monograph on the iconography of the 16th president’s last moments:  Lincoln’s Deathbed in Art and Memory:  The “Rubber Room” Phenomenon (Thomas Publications).

Judge Williams is currently at work on an annotated bibliography of all the Lincoln titles published since 1865 for Fordham University Press.

A practicing attorney for more than 25 years, Williams was nominated for the Superior Court bench by the Governor of Rhode Island in late 1995, and then unanimously confirmed.  He served on the Superior Court from December 1995 to February 2001.

Born in 1940 in Cranston, Rhode Island, Williams received his A.B. in government and history from Boston University in 1962, then entered the military.  Rising to the rank of Captain in the U.S. Army, he saw active duty in Vietnam, serving for five years.  Among his awards and decorations are the Bronze Star, three Air Medals, an Army Commendation Medal, two Vietnamese Campaign Medals, and a Combat Infantryman’s Badge.  He was also decorated by the Republic of Vietnam with – among other honors – the Gallantry Cross with Silver Star for Valor.

Returning to Rhode Island after his discharge, Williams entered Boston University School of Law, earning his J.D. in 1970.  He was admitted to the Rhode Island Bar in 1970, and to the bar of the U.S. Supreme Court in 1976.

Williams subsequently earned a Master’s degree in Taxation, and served as a visiting lecturer at the Rhode Island School of Design.  He is now an adjunct professor at Roger Williams University School of Law and the U.S. Naval War College in Newport, Rhode Island.

In his long career in public service, Williams served as a solicitor and arbitrator for a number of Rhode Island towns and communities.  He was twice elected Town Moderator of Richmond, Rhode Island, and was elected a delegate to the 1986 Rhode Island Constitutional Convention.  He was appointed Chair of the Rhode Island Housing and Mortgage Finance Corporation by the governor in 1995.  In addition, he served in several judicial capacities before his elevation to the Superior Court in 1995, including Judge of Probate, Member (and later chairman) of the state’s Board of Bar Examiners, and member of several arbitration panels – on which he now serves for the American Arbitration Association.

A longtime resident of Hope Valley, Rhode Island, Judge Williams has been married since 1966 to the former Virginia Elizabeth Miller.