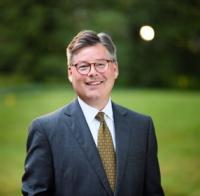 William Anthony Hay is a Professor of History specializing in British History, International Relations, and the Atlantic World over the long eighteenth century.  Students looking to pursue graduate work in those fields are encouraged to contact him directly.  Elected a fellow of the Royal Historical Society in 2009, Hay is a past-president of the Southern Conference on British Studies.  Along with research grants from the Harry Frank Guggenheim Foundation and the Earhart Foundation, he has held fellowships at the Lewis Walpole Library and Beinecke Rare Book and Manuscript Library at Yale University and the William L. Clements Library at the University of Michigan.  Most recently, Hay was the 2019-20 Garwood Visiting Fellow with James Madison Program in American Ideals and Institutions at Princeton University.
Currently Hay is writing a book tentatively entitled “King George’s Generals: Strategy, Policy and Britain’s War for America, 1763-1781.”  It explores how five British generals—Thomas Gage, Sir William Howe, John Burgoyne, Sir Henry Clinton, and Lord Cornwallis—understood the problems the American Revolution presented them and the ways in which their outlook shaped military operations to defeat it.  As a study in military decision making, it analyzes Britain’s experience from the conflict’s origins in the 1760s through the defeat at Yorktown to illuminate how the British fought the war for America and why they lost it.  Research for the project has drawn Hay into further work on Britain and the American Revolution in global context and grand strategy more generally.
Hay’s most recent book Lord Liverpool: A Political Life (The Boydell Press: 2018) takes the career and outlook of Robert Banks Jenkinson, 2nd Earl of Liverpool, one of Britain’s longest serving prime ministers to examine the crucial transition from the Georgian to the Victorian era. A new project on the Queen Caroline Affair in 1820 builds on Hay’s study of early nineteenth century British politics and culture.
His first book The Whig Revival, 1808-1830 (Palgrave: 2005) examines the political realignment that brought the Whig party to power in 1830 through an alliance with provincial interests. In 2009, he published a volume on Walter Bagehot, the 19th century theorist, political writer, and editor of the Economist, in Pickering and Chatto’s Victorian Political Lives series.

Hay writes regularly for publications including the Wall Street Journal, The National Interest, and Modern Age, along with the online Law and Liberty.  Before coming to Mississippi State, he directed a program on European politics and U.S. foreign policy at Foreign Policy Research Institute (www.fpri.org).  Hay was also book review editor (2001-6) associate editor (2007-9) for the quarterly Orbis: A Journal of World Affairs.  He previously worked with the Presidential Oral History Program at the University of Virginia's Miller Center of Public Affairs.

“An End to Empire? British Strategy in the American Revolution and in Making Peace with the United States” in Justifying Revolution: Law, Virtue, and Violence in the American War of Independence.  Philip Hamilton and Glenn Moots eds.  (University of Oklahoma Press, 2018).

“Lord Liverpool: Alliances, Intervention and the National Interest” in The Tory World: Deep History and the Tory Theme in British Foreign Policy, 1679-2014 (Ashgate, 2015).

“The Paradoxes of Victory:  Waterloo’s Political Consequences at Home and Abroad.”  Invited presentation for an international conference entitled “Waterloo: The Battle the Forged a Century.”  King’s College, London. September 2013.

“Religion and the Politics of Late Hanoverian Reform: The Durham Clergy Case of 1821.” Southern Conference on British Studies.  Memphis, Tennessee. 2004.